Kötter Josef Lammers had sold piglets at the market in Münster. And because that had worked out so well, Lammers thought to himself, you can take the train home today, that's probably sitting in. He went to the train station and bought a ticket to Altenberge. "When is the next train," he asks the officer. "It will take more than an hour," he replied. "What do you want to stand around here for," Lammers thought, "you can walk all the way to Kinderhaus," and set off, always following the rail. It wasn't long before one of the railroad police arrived. "You are not allowed to walk here and it will cost you a thaler now". But then Lammers got big "What," he said, "I'm not allowed to walk here?" and at that he pulled his ticket out of his vest pocket, "Look here, I'm even allowed to drive here." 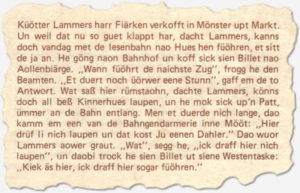 It was in 1921, Mr. So-and-so, plant manager at Siemens AG in Müönster, had to go to Essen to the headquarters. But the driver was sick. Annoyed because he couldn't drive a car, he complained to the works manager: "Is there anyone in the company who can drive a car? Bedrjüppelt keken de Mannswlüde up öhre Holskenspitzen. There was no one to report, the sunny little ones with crooked hands shook hands and greeted the purely puzzled boss to deny that he wanted to drive one. Disconcerted, the five men, mothers and grandparents looked at the little boy. "Who are you?" asked the boss. "Our pen Ludger Lammers," says the mester. "Can he drive me to Essen in one piece?" the man asked. "Dat gleif`ke wull," was the answer. Nu klüorde sik dat lange Gesicht von den fienen Häern in Sunndagstuch up. He told the apprentice to go on with his work. Ludger Lammers dried his hands and said: "Driving is no problem, and it would also be a nice ride, only I don't have a guide" and then he, the boss, had to look for another one. "No, no," the boss said in his nautical voice, "go on and get us there, it's urgent! When we arrive, you have a driver's license". Just like that, Ludger Lammers had a license for all times, and it was even valid.

"Isn't there anyone in the whole company who can drive an automobile?" the boss of Siemens AG rumbled through the factory hall in Münster. Entered, those present looked at your wooden shoe tips.

Then a small young man with frizzy hair shyly raised his hand and offered to help the slightly disturbed boss out of a jam.

The boss, master and journeymen stared at the little boy in disbelief. "Who are you? asked the boss. "Our apprentice Ludger Lammers," the master replied.

Would he, the apprentice, be able to chauffeur him to Essen in one piece? Well, he probably nodded in agreement. What a relief for the so seriously dressed city dweller. He was already about to board the company car when Ludger Lammers' brow furrowed. "Hm, actually, yes driving", that was not really the problem just a driver's license, which was missing. So Ludger thought to himself, "would have been a nice joyride" and the man would have to look around for other possibilities. „No, no," said the boss in great distress, "now make sure we get there, and then we'll get a driver's license on top for the return trip. - That's how it happened.

DEILAMU !!! - There was a time when labor was still a rare commodity: when the three friends, Antonius Deiter, Alfons Lammers and Bernhard Multhoff, were sitting in the pub one day having a beer, the conversation turned to a newspaper advertisement. In it, the municipality sought a demolition contractor for a dilapidated building in Altenberge. But even after publishing three times, no one had come forward. - Unexpectedly consulted, quickly worked out a name, ready was the virgin company „DEILAMU“! With full glasses and broad laughter, the young men sealed the rosy future and handed over a coaster to the municipality the next day: just that failed offer for demolition. Take a vacation, grab and make smart money! That was the motto. – Should a few minor questions have been considered beforehand, such as 'can we move the rubble at all and where to put it in three devils' names'? But such trifles could not diminish the urge to act and so shortly thereafter a trio armed with hoe and hammer moved against the object.

As the height of the dilapidated structure dwindled, however, the need for a solution grew unmistakably until, indeed until, a large chunk from the roof broke first through the first floor ceiling and then through the floor. Through the floor? Why? The building had no basement! cAstonished, the three "specialists" peered through a circular hole into the unfathomable depths of a draw well. Why go far, the solution is so close! The rubble in the hole, the wood and some leftover sold, such was the young company of the year 1952 DEILAMU. And the craftsmen on site were very annoyed: we could have done that too - haha, ha'm we seen....


We do not process personal data.